National Bass Anglers Association (NBAA)  Coverage   VERY LITTLE INTERNET- Sorry folks  lakeside it is VERY low.  We are trying to FACEBOOK LIVE you can check that out HERE if the signal will hold out  …

The rain once again hammered down as the 91 finalists took off on Kentucky tournament waters. After a year of competition in their local divisions, and fighting their ways through over 100 teams in the black and blue qualifiers, this was it. The rains led to rising water levels and strategy changes, mostly leading to the banks.

With only a handful of boats to go, David Hasty and Seth Borton took the lead with 18lbs 13ounces. From there 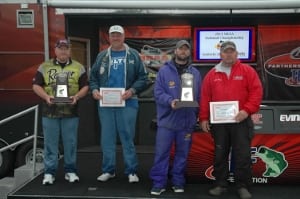 all the duo could do was sit in the “hot seat” and wait. Many teams came close as the weigh-in continued but the lead wasn’t contested until Eugene Steinke and Dave Burton approached with 18lbs 13ounces to lock it in with a tie.  The crowd and the competitors anxiously awaited the tie-breaker rule.  But, when both teams were offered the chance to share the title, they gladly accepted. END_OF_DOCUMENT_TOKEN_TO_BE_REPLACED 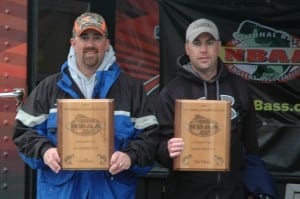