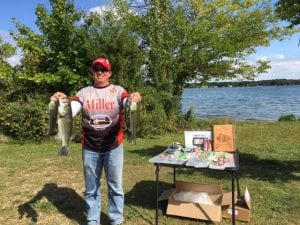 The 2016 NBAA 1 on 1 National Championship was held on Austin Lake in Michigan, September 24.  A cold front moved through the area Friday night bringing colder temperatures and clear blue skies for Saturday morning’s event.  The change in conditions slowed the bite but Michigan angler, Ron O-Keefe, put together a pattern to earn the NBAA 1 on 1 Champion title.

O’Keefe not only scored the title of 2016 NBAA 1 on 1 National Champion but also a Humminbird Helix 5 and sponsor merchandise.