We once again would like to thank all the anglers who came out and fished the Fall Classic event at Burt and Mullet Lakes! For those anglers who pre-registered online, we held an “Early Bird” prize drawing!

Congratulations to John May and Terry Campbell! They were our “Early Bird” Prize drawing winners at the 2013 Fall Classic event! The prize package was a Minn Kota 3-Bank Charger and a Humminbird PirahnaMax 153 locator! (Pictured Below, Click on Image to Enlarge) 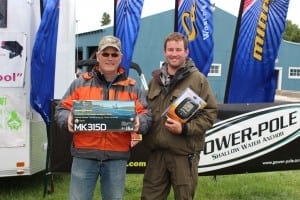 We also had 2 prize tables set up with sponsor products. Angler’s boat numbers were called and each team got to pick items off the table! We also gave away another 3 bank charger, and a few other PiranhaMax locators! Here are some pictures below! (Click on Image to Enlarge)